I would like to thank the Wellington Chamber of Commerce for organising this event. This event comes off the back of the Prime Ministers trade mission to Latin America, where we visited four countries over 10 days Mexico, Colombia, Chile, and Brazil.Nathan Guy

I would like to thank the Wellington Chamber of Commerce for organising this event. This event comes off the back of the Prime Minister’s trade mission to Latin America, where we visited four countries over 10 days – Mexico, Colombia, Chile, and Brazil.

The mission was a great success. Strong relationships were formed, or strengthened, both at the political and at the business level.

At the political level, a highlight was Colombian President Santos publicly expressing his desire for a Colombian-New Zealand Free Trade Agreement. On the business front, 139 meetings took place, this resulted in 49 leads which are likely to lead to new business.

I’m keen to see continual progress made on this mission. I am determined to do what I can to help New Zealand businesses succeed in Latin America.

New Zealand is a small economy that relies on trade. If we are to increase our living standards, create more jobs and become more prosperous, then we need to grow our exports.

This is a key focus for this government. It is why we have set a very ambitious goal of increasing our exports from 30% of GDP to 40% by 2025.

It is also why we have a dedicated work stream under the Business Growth Agenda focused on building export markets. This work stream consists of a wide range of projects. There is no silver bullet. We need to do a lot of things, and we need to do them well.

The Prime Minister has just come back from a very successful China mission, where New Zealand and China reaffirmed our goal of increasing two way trade to $20 Billion by 2015. I intend to follow up on his mission in the middle of the year.

We are also progressing a number of free trade agreements, including our most ambitious negotiation to date – The Trans-Pacific Partnership. This negotiation now involves 13 countries across the Asia-Pacific, with Japan joining over the weekend.

The TPP is not just about reducing tariffs, although that will be important. We are committed to a shared goal of a comprehensive, high-ambition, next-generation agreement. It is about increasing the business competitiveness of the region. It also has an end prize of over $2 Billion.

Last week the Prime Minister announced that we will be investing an additional $158 million over four years into tourism in Budget 2013.

This new funding will boost our marketing of New Zealand to the world, encourage investment, bring more international events to our shores, simplify visa processes and attract more high-value tourists.

However, improving our competitiveness is not just about improving access to overseas markets. It is also about creating the best environment here in New Zealand to enable our businesses to succeed.

In my Primary Industries portfolio the Government and industry have collectively invested $650 million into primary sector innovation through the Primary Growth Partnership.

This $650 million investment is expected to bring returns to the New Zealand economy in the order of $7 Billion. That is, for every dollar the Government and Industry put in, we are expecting to see $11 benefit.

Another key feature of my portfolio is investing in irrigation infrastructure. The drought, and recent downpours shows that New Zealand doesn’t have a water shortage issue; we have a water storage issue. The fact that New Zealand only stores 2% of the annual rainfall illustrates the potential gains in this area.

That is why we are investing $400 million to increase irrigation across 420,000 hectares and unlocking $4 billion of extra export potential by 2026.

This $400 million investment will be funded from the Future Investment Fund which allocates the returns from the Mixed Ownership model.

I believe that this is a clear example of the way in which this Government is thinking strategically about investing in our future. The proceeds from selling 49% of some of our energy companies will be invested in crucially needed infrastructure that will support future generations.

I’d like to make a few observations from the mission to Latin America.

Firstly, the market opportunities are vast. The four countries we visited had a combined population of 372 million people, and a combined GDP of US$4 trillion.

They are also growing, and growing fast. Mexico, Colombia and Chile are growing on average by around 5% per annum.

This growth in wealth will mean an increase in demand for the things that New Zealand produces.

New Zealand is well-placed to take advantage of these opportunities. We have a strong brand in Latin America. Their perception of New Zealand is that we have a transparent and accountable government; and that we are world leading in providing a competitive business environment. This is consistently backed up by our high rankings in global Ease of Doing Business surveys.

More importantly New Zealand’s brand in Latin America is one of trust and integrity. In my opinion it is crucial that we maintain and build upon this reputation.

There are plenty of opportunities to take advantage of.

Mexico offers a strategic opportunity into the USA market, one that a number of New Zealand companies are already taking up. It is our largest Latin American trading partner and it is great news that they have joined the TPP negotiations. This now means that three Latin American countries are involved in the negotiations.

Colombia is a vastly different place to what it once was. Its security situation is improving. It has a young and highly educated population, has great resource potential, and is focused on becoming an economy that welcomes investment and is business friendly. Analysts also say that it is on track to become South America’s 2ndlargest economy.

I view our relationship with Chile as one of cousins, and we can build on this relationship. I see great opportunities to collaborate in the agricultural, education and natural resource sectors. Chile is also realising that it needs to invest in better water storage infrastructure, and has been investing heavily in geothermal energy.

Brazil is not an easy place to do business, but is has amazing potential. It is has a global GDP ranking of 7th, and is projected to increase to 5th. There are a number of New Zealand companies doing business in Brazil, and New Zealand investment in Brazil has reached $NZ350 million.

New Zealand has historical links with Europe and North America. Over the last ten years we have come to realise that Asia is on our door step and offers huge opportunities. I believe the time has come for New Zealand to look across the other side of the Pacific to the awakening Latin American Giant.

Globalisation has changed where New Zealand sits in the world. We are firmly in the centre of the hub of global activity – The Asia-Pacific. And we need to make the most of this opportunity.

As a government we are here to support businesses who are looking to export. Whether it is providing a competitive business environment, reducing export barriers, or through the work done by New Zealand Trade and Enterprise and the Ministry of Foreign Affairs and Trade.

But the government can only do so much. It is businesses that grow exports, not the government. The businesses who came on the mission were chosen because they had done business in Latin America, and were looking to expand. There are representatives from these businesses in the room. I encourage you all to make the most of these contacts.

I look forward to hearing about the continued progress of New Zealand businesses in Latin America. 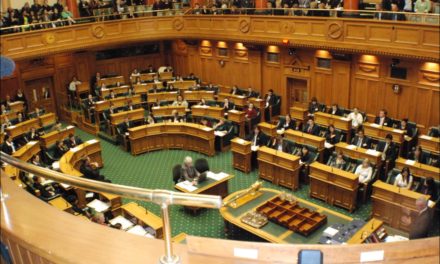