We have the chance to open up more markets to goods and services backed by three proud words: Made in America.

Imperilled by Unfree Trade: The TPP on Environment and LabourBinoy Kampmark

“We have the chance to open up more markets to goods and services backed by three proud words: Made in America.”

The estranged political classes continued their defiance of democratic practice by signing, again without the involvement of non-trade interests, a document that has been sold as a choice between the rash and the damned. The delegates at the Atlanta round of talks for the Trans Pacific Partnership Agreement came from twelve states, and some of them were acutely aware that domestic matters were pressing. The election cycle in the United States is starting to gain steam. Canada faces a close election on October 19. Australia’s new prime minister is hunkering down.

The TPP is a monster in design on several levels. While it has been reported that China “cautiously” welcomes the agreement, there is little doubt that it has been shaped as a form of financial weaponry against the giants of the Asia-Pacific. Towards Russia, there is the Trans Atlantic Investment Agreement, framed to incorporate the European Union. Then comes the enveloping Trade Services Agreement.

The chatter in advance of the agreement has been filled with astrological predictions about wealth creation. Crystal ball gazers have decided to abandon any recourse to evidence. The tendency in free trade is to gut local industries in favour of capital penetration by foreign companies. Local labour forces are reconstituted, a euphemistic way of describing job flight, with labour skirting away to cheaper sources of production. The observation by Ross Perot about the “sucking sound” of jobs from the United States if such agreements were implemented is still pertinent.

Despite this, President Barack Obama would have us believe that the agreement is a brilliant contribution to labour, that it somehow harmonises standards. (Do free trade agreements actually ever harmonise anything?) “The TPP,” tweeted the President, “establishes the highest labour standards of any trade agreement in history.”

This is where a juicy, refuting case study is in order, a cold water dose of evidentiary proof. Australia’s gains from its own free trade agreement with the United States have shown up as mind numbing losses. The pattern is familiar: predictions of growth and obscure references to benefits despite incompetent analysis and an inability to describe “the national interest”. US negotiators, however, knew exactly what they wanted on that score.

Analysis conducted on the implications of the AUSFTA by the Australian National University this year suggest that both Australia and the United States actually reduced their trade with the rest of the world by a staggering $53 billion. Preferential treatment for US goods, services and investment seemed to have one notable effect: diverting trade away from more efficient and competitive suppliers.

Free trade, in this case, ceases to be truly free in encouraging a distinct lack of competition, something that repeats itself in the intellectual property chapter of the TPP regarding patents and biologics. Graphs happily delved out by the White House promising a 48 percent increase of US exports within a time frame should be regarded, not merely with caution but withering disdain.

Even prior to the ill-tidings brought by AUSFTA, the United States was engaging in its own bit of free trade delusions with the North American Free Trade Agreement, an agreement driven by President Bill Clinton till it became law in 1993. While there are expected disagreements among economists over the consequences, a good number point to the evisceration of local manufacturing and a thriving US trade deficit.

Such are the outcomes of liberalising trade dogmas. As ever, the prediction acts as the staying mechanism of belief, the fanatic’s code. The economic star gazing Peterson Institute for International Economics (PIIE) looked at their own set of Tarot cards in the 1990s and saw a trade surplus with Mexico, and 170,000 new US jobs by 1995.

It took two briefest years to see a revised total of zero in terms of job growth. Mexico and Canada duly registered agricultural surpluses. US companies involved with food production and processing shot over to Mexico to the sound of money – capital migrating to areas of lower wages. But as dogma reasserts itself, Peter Peterson of the corporatocracy has again promised what he cannot deliver: accurate projections about job and export increases with the TPP.

The other features of deceptive harmonising stem from the illusion that areas such as the environment are somehow protected by the agreement. This is certainly the position from the Whitehouse, with suggestions that some environmental groups have swallowed the pill regarding the “fluffy” narrative of trade and conservation.

In a distributed message, the White House took the rather distasteful measure of claiming that the TPP agreement would actually combat wildlife trafficking, illegal logging and illegal fishing. It would make core “environmental protections” enforceable “through the same type of dispute settlement as other obligations.” A closer reading of what has been made available via Wikileaks suggests that the environment is set for a battering, a trade-off for solid corporate profits.

From the start of the TPP, a broader agenda for the control of trade from Washington’s perspective was pushed. Obama has never shied away from the feeling that the Chinese economic juggernaut will, at some point, pry away American power, counting it among countries “that would like to take away America’s mantle of economic leadership.”

Such parochialism finds expression in an email from the president to the White House email list in February. “My top priority as President is making sure that more hardworking Americans have a chance to get ahead. That’s why we have to make sure the United States – and not countries like China – is the one writing this century’s rules for the world’s economy.” Never could a more startlingly direct statement on hegemony be stated.

That said, such enunciations of US hegemony show bloody minded determination and daftness. Both come in equal measure – the pugilist’s determination to bloody opponents who might get the better of you, claiming that pockets will be filled; and the self-delusion that you are actually benefiting yourself in embracing such a policy.

Obama’s persistence on emphasising the sanctity of the US work force in the face of the global market is discordant: the policy of the boardroom tends to often cut through the politics of labour and parliamentary representation. Wealth may well be created, but it remains corporate, concentrated and distant. Those citizens who trudge on Main Street remain the squeezed, the patronised and the belittled.

Dr. Binoy Kampmark was a Commonwealth Scholar at Selwyn College, Cambridge. He is lectures at RMIT University, Melbourne. Email: bkampmark@gmail.com 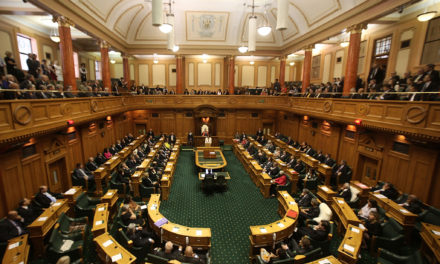