Overnight in Japan the remaining eleven governments have concluded the ‘revised’ but essentially unchanged Trans-Pacific Partnership Agreement (TPPA-11), now called the Comprehensive and Progressive Agreement for Trans Pacific Partnership. The signing is set for 8 March 2018 in Chile.

University of Auckland law professor Jane Kelsey predicts ‘the rebranding of the TPPA won’t fool anyone, especially Labour and New Zealand First supporters who backed those parties because they opposed the original deal. Labour is now actively promoting it and Winston Peters is conveniently and uncharacteristically silent’.

‘They will also ask, rightly, why the recently elected Canadian government Canada has achieved what the Labour-led New Zealand government said was impossible.’

Canada has reportedly secured new protections for culture, as well as rules of origin for automobiles, which was not on the list of outstanding items in the TPPA-11 ministerial statement in December last year. These additions appear to be through side letters, rather than changes to the actual text. Japanese officials have said the details won’t be released until after the revised agreement is signed.

‘Canada’s new government had the backbone to demand and secure what it describes as “real gains” through side letters’, Professor Kelsey said.

‘By contrast, New Zealand’s new government said it asked other countries to sign a side letter on investor-state enforcement and most wouldn’t play ball. It then shrugged its shoulders, took credit for a consensus agreement to suspend various items pending US re-entry, and spun the deal as the best it could achieve for New Zealand’.

Professor Kelsey says that New Zealand apparently didn’t ask for changes to other parts that conflicted with the government’s pre-election policies.

‘Instead, it is rushing through urgent consultations to allow it to restrict foreign ownership of forestry cutting rights, in addition to residential housing, as part of the definition of “sensitive land” before the TPPA-11 comes into force. Any similar changes to the foreign investment regime that are not legislated by then will be impossible, forever, unless they are prepared to face a dispute under the TPPA-11.’

‘Labour needs to explain why it was prepared to cave when Canada stood firm. Winston Peters also has to get off the fence and tell his supporters and the country whether he is going to renege on his watertight commitment to oppose the TPPA.’ 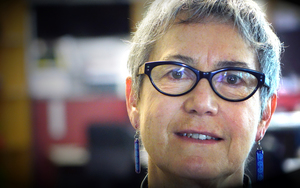 We need evidence on the TPPA, not spin

NO DEAL IN MAUI!