Nationwide Day of Action against the TPPA-11 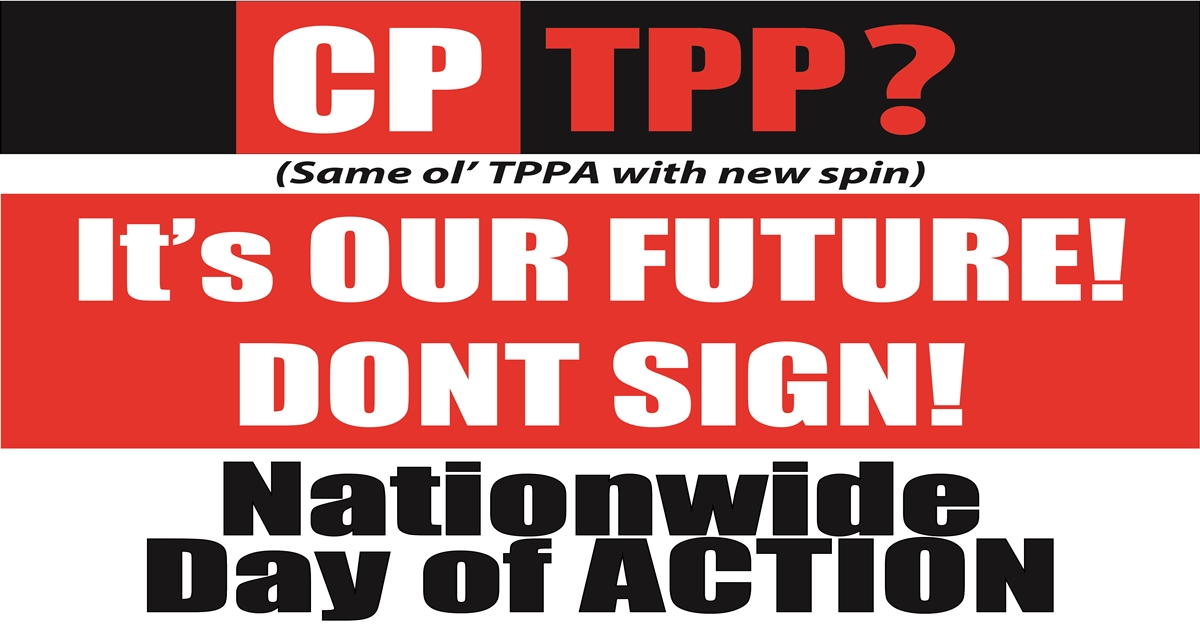 Our day of action has now morphed into a week of action in centers around the country.

Our government is set to sign the rebranded Comprehensive and Progressive Agreement on Trans-Pacific Partnership (CPTPP) along with 10 other nations in Chile on the 8th March.

Following the collapse of the TPPA in the wake of the US withdrawal, the election of the new Government put a spring in the step of many. The Labour Party, New Zealand First and the Green Party had all said they would not support ratification of the TPPA. During the parliamentary examination of the text, Labour cited concerns about sovereignty, secrecy and inadequate economic modelling leading to uncertainty in projected outcomes; the Greens added that the TPPA is “inimical to the imperative of sustainability”; and New Zealand First focused on the anticipated dangers of Investor-State Dispute Settlement (ISDS).

What on earth happened? Labour has done a full U-turn, New Zealand First has joined in on the spin, and the Greens are very lukewarm in their disagreement.

What’s different?
Let’s be crystal clear. The “new” text is exactly the same, the only change being that 22 of the 1,000-plus original provisions have been suspended. These 22 provisions – mainly concerning intellectual property – have not been removed so that they can be revived if and when the United States comes back on board, as the Trump administration has indicated it is willing to do. When pushed on this point, the Minister for Trade and Export Growth David Parker said that New Zealand could veto any attempt by the United States to join if that would compromise the Labour Party’sfive bottom lines. That, of course, would not stop a different government from giving up important aspects of New Zealand’s sovereignty simply to reduce tariffs for a trifling increase in GDP. And what was the Minister’s response to that serious concern? “Time will tell.”

Even now, in fact, Labour’s bottom lines have not been met. The so-called Comprehensive and Progressive Agreement for Trans-Pacific Partnership (CPTPP) contains all of the core investor protections that are predicted to restrict the ability of Parliament to make laws in the interests of New Zealanders. As far as we know, has been no health impact assessment or analysis of the economic costs and benefits, as the governing parties called for when they were in opposition. The Crown has not discussed how it intends to strengthen protections for Māori, as recommended by the Waitangi Tribunal. And it is all well and good for the Prime Minister to call climate change her generation’s “nuclear-free moment”, but that sort of rhetoric would be undercut by signing up to an agreement that prevents action on environmental concerns by empowering foreign investors to sue, for example, if the Government sought to close coal mines and roll back permits to prospect for offshore petroleum.

The TPPA contains the wrong rules for New Zealand’s future. It threatens to place a frightening price tag on pursuing the policies we need to get out of last century’s fossil-fuelled economy, while at the same time preventing public oversight of this century’s data – driven economy by empowering the private corporations that control intellectual property and the global tech infrastructure while avoiding their fair share of tax. All at the expense of the worker and the patient and the taxpayer and the environment.

Since the TPPA is still not the deal that we want for our country, we are encouraging everyone to show strong opposition to our government signing the TPPA. We will be holding a Nationwide Day of Action on Sunday the 4th of March, please tell your family, friends and colleagues, get together and head along to your closest family friendly action, to send a strong message to the government not to sign the TPPA!.

On Thursday the 8th of March (signing day), we invite you to join us outside of Parliament at lunchtime to send a strong resounding message to the government that we do not want the TPPA or any similar trade deals in the future. It’s our future – the future of our children, we want truly progressive trade deals!

Events around the country;

Christchurch Wednesday 7th of March and Thursday 8th of March:

If Labour wants to ‘tame globalised capital’ why is it supporting investment rules in WTO? – Jane Kelsey