John Key says NZ would support American air strikes in Iraq, compares situation in Iraq to Yemen. I suspect I would adopt the same position I have in Yemen which is to say were opposed to terrorism, were opposed to al-Qaeda, the same is …
Patrick Gower interviews Prime Minister John Key in Washington DC

“I suspect I would adopt the same position I have in Yemen which is to say we’re opposed to terrorism, we’re opposed to al-Qaeda, the same is the case with ISIL. We’ve designated them as a terrorist group. We see them as bad people out there to create carnage and unrest and on the back of that we’ve supported those drone strikes in so much that we’ve accepted the US has done that at the invitation of that government.

Key admits TPP may go through without tariffs being eliminated from dairy.

John Key: Look I mean I think it’s demonstrated both in his words and his actions. I remember when we were here in 2011 the meeting was about half an hour. This time, all up, we were there for about an hour and twenty minutes. Very long conversation, I think very meaningful and detailed conversation. And just such a nice touch from him to take us for a wander around the garden and show us, you know, sort of the private parts, took me to his private office and showed me how all that worked. It’s a relationship that’s built up over time, it’s I think a friendship and he obviously just feels comfortable in my company, I certainly do in his. So it’s great but at a professional level, you know, the countries are working well together. It’s a longstanding relationship. New Zealanders know that and I think the vast bulk of New Zealanders value that.

Patrick Gower: And this week of course the United States is involved in one of its biggest foreign policy challenges in a long time with Iraq. The President obviously gave you an up to date briefing today, what did he tell you?

Well I think the first thing you’d say is it’s a very complicated position out there. And you know the Americans went to war in Iraq, it cost between 2 and 3 trillion US dollars and in the end we’re back in the situation again where virtually civil war is breaking out. And I think what that shows you is both the human cost, the financial cost, the fact that it arguably hasn’t worked and the appetite of the American public which is basically non-existent to go back into Iraq means that’s not going to happen. They’re not going back in my view, barring anything I don’t know, in some sort of conventional war boots on the ground. I think what they are going to try and do is see if they, through diplomacy, can find some way through that. And he’s – President is sending Secretary Kerry out to the regions to talk to all the leaders and talk to the leadership in Iraq. But in the end I think their strong preference is the people of Iraq sort this out.

One thing you said there about a conventional war, of course that is off the agenda, but a more targeted military strike is possible effectively air strikes, did you discuss that, the potential for that, with the President in the White House today?

Yeah, he did discuss that. But the way I’ve sort of explained that would be he characterised how challenging that is and that doesn’t mean that couldn’t happen. But it’s really difficult because to understand the situation in Iraq is to understand that there are two big religious groups really, the Shiites and the Sunnis but in amongst all that is effectively a terrorist group ISIL and they are part of the Sunni’s really, although they’re an extreme element of them. And so if you go and target ISILians, worth remembering New Zealand has designated ISIL as a terrorist group, so if you were going to go and target them the question is how do you identify them? It’s like going sending in either drones or strikes against al-Qaeda, you can do that from time to time, you get information about a small group, but this is a big group that could be any number, they’re very unsure, maybe 8-thousand maybe 10-thousand, maybe more. It’s quite a difficult thing to do.

Yeah so he was saying it would be difficult to target them.

If it did get to a point though where the Security Council failed, like it did with Syria and America decided to strike – Did President Obama signal that he would like New Zealand’s moral support or backing for some sort of airstrike like that?

No, I think he was backed up from that point. I think his general view was he’d both hoped it wouldn’t come to that and that the pathway they’re taking at the moment, which is A. assessing the military capability of the Shiite government effectively and secondly, whether they can find some kind of diplomatic way through, is their preferred option. They’re certainly sending out military capability advisors. I mean, in the end you know it’s worth remembering if you take the position in Yemen as a bit of an example. In Yemen the Yemeni government have asked for drone strikes to take place to fight back against their terrorists. Well actually in Iraq, the Iraqi government has actually has actually done the same thing against ISIL. So I don’t think they’d actually reach out to somewhere like New Zealand and say ‘will you morally support us’. In principle we’re opposed to terrorism, we’ve designated them as a group and the Iraqi government would be the one calling the shots. But I honestly think that’s really kind of last place he wants to end up. I can’t absolutely say it can’t happen but I just don’t think it’s likely to happen any time soon.

I don’t think he’d formally come and ask that. I think that question would be there –

But if I asked you or would people ask you, at that point is that something –

I suspect I would adopt the same position I have in Yemen which is to say we’re opposed to terrorism, we’re opposed to al-Qaeda, the same is the case with ISIL. We’ve designated them as a terrorist group. We see them as bad people out there to create carnage and unrest and on the back of that we’ve supported those drone strikes in so much that we’ve accepted the US has done that at the invitation of that government.

So to summarize as a last resort if air strikes have to happen, you would back it if they were aimed at the ISIL terrorist organization to help Iraqi civilians.

Well given that we’ve designated them terrorist group and if it was at the invitation of the Iraqi government, we certainly wouldn’t condemn it.

Yeah so that’s a yes.

Yeah I mean look I think that’s a realistic way of looking at it. We’ve – we accept that they are a terrorist group that are undertaking carnage and killing a lot of people in Iraq. I think in the end though if you take a bigger picture view of this thing, this is a very complicated thing that goes back centuries and it crosses religious grounds and ethnic grounds, it’s woven with all sorts of difficulty we find probably hard to understand in a country like New Zealand. So I think in the end they’re going to try and do everything they can to negotiate a way through.

What do you make of the argument made by Secretary of State John Kerry yesterday that there is a fear that some of those foreign fighters in the ISIL forces can spread out to the West?

Well I think they believe that to be absolutely correct. They see people from countries around Europe and potentially around the world that are engaged in the conflict. They may well be with ISIL, they may be with other groups but they certainly have seen a lot of people for instance pouring into Syria and they may have originally come to fight the Assad regime but potentially some of them have found their way into the ISIL group and potentially in Iraq. Now the fear is they fan back out into countries that they have come from. And I think one of those people who have been fighting out in Syria was explained to us, I think was responsible for a bombing that took place in Belgium for instance. So that’s always a risk.

Because we know that Kiwis are doing that as well, is that a risk for New Zealand. Is it a realistic risk now?

I think it’s a very minute risk in reality. But it’s-

Because of the numbers involved?

Because of the numbers, yeah. There are much bigger numbers coming from European countries. So from New Zealand’s point of view we can and have identified people in hot spots associated with groups that you and I might know. And we, as best we can, monitor their actions, try and stop them going if we potentially can and do everything we can to stay connected to because of that fear that they could potentially come back and pose a threat. But I think its worth remembering that you need to put a bit of context around that. It’s a very low risk, but like everything in life there is some risk.

President Obama also mentioned intelligence sharing; he praised our role obviously in Five Eyes. Could it be that intelligence that we gather is helped to use drone strikes that end up happening in Iraq?

It’s possible. I can’t 100 percent rule that out. I don’t comment about where we overall gather information and how we do that. But we’re part of an intelligence sharing agreement, there are five partners to that and some of the information we gather is no doubt fed into the system and used by others.

And just quickly on the Trans-Pacific Partnership. We saw a strong signal there from the President that he wants that done. What did he tell you, is it going to get done? Is the TPP going to get through?

Well what he told me is what he’s been constantly saying to me both publicly and privately, it’s an important item for President Obama and for the US economy, he sees it as a legacy item, something he’d like to achieve. It’s economically important for the United States and he’d like to get there in the form of a high level comprehensive deal.

Would that have tariffs on dairy, on New Zealand dairy?

Well our position fundamentally is to eliminate those tariffs, now there’ll be a time (interrupted)

But could we end up with those tariffs to get the deal across time line?

Well essentially we’ve got tariffs today. The point is to eliminate those tariffs as a result of TPP. So I mean.

Could we fail to eliminate them?

Could we fail? Um yeah, look in anything in life it’s always a trade off but don’t forget there are lots of things that every individual partner wants and they range from intellectual property through to SOE reform. Ours happens to be primarily focused on dairy and beef and agricultural reform.

Just quickly, we might not get exactly what we want there if this deal needs to be done?

Hmm, well my preference is to say we will get everything we want but you know we’ve got more negotiations to go. And these things are hard fought and they take time but in the end a better deal is worth waiting a little bit longer for.

Talking with TPK on TPP is not Māori engagement 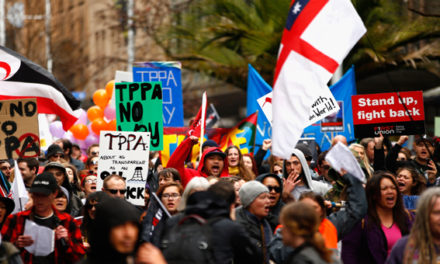 John Key: My personal highlights of the year for you

26,000 calls for Groser to release the TPPA text