Sobering address on state of the environment

New Zealand and the world are failing to fulfil many of the basic principles of sustainability and we must face up to our situation in order to avert serious risks, warns renowned conservationist Emetrius Professor Sir Alan Mark.Sobering address on state of the environment

New Zealand and the world are failing to fulfil many of the basic principles of sustainability and we must face up to our situation in order to avert serious risks, warns renowned conservationist Emetrius Professor Sir Alan Mark.

Sir Alan, of the University of Otago, spoke to a packed lecture theatre at Lincoln University last week as keynote speaker for the University’s annual State of the Nation’s Environment Address.

During his hour-long presentation on 30 September, he suggested that economic growth had become “an end unto itself rather than a means to a better life” and this attitude was bad news for environmental sustainability.

“Many people assume that if we have a healthy economy, other aspects of well-being will follow,” he said. “Extreme wealth is considered a major sign of success. How do we achieve a sustainable economy with a financial system that requires growth for stability?

“At the moment, we are living in a non-sustainable world and as Professor John Kay, of the London School of Economics has said, ‘the world economy is a ticking time-bomb and global markets are a lit fuse.’”

He also drew attention to what he called the negative environmental impacts of opencast mining in the Stockton Plateau and Happy Valley and pointed out that the increasingly extreme weather patterns seen in the country were likely symptomatic of global warming.

He went on to describe the Trans Pacific Partnership Agreement (TPPA) as problematic, due to it being “shrouded in secrecy” and “offering multinational corporations the ability to sue governments for losses relating to policies designed to protect the environment”.

“Economic development is now outstripping environmental sustainability in many areas,” he said. “Adaptation, or market forces alone, are not viable options to address the environmental crisis.

“GDP is a crude measure of goods and services, wealth and well-being and we need to get away from solely focusing on this as an indicator of a country’s performance. Better indicators are healthy children, quality of life and education, native forests and white sandy beaches, as is covered by the Genuine Progress Indicator (GPI) approach to assessing our human welfare.

“To ignore the symptoms of environmental degradation is to fail future generations.”

TPP a matter of when and not if, farming leader says 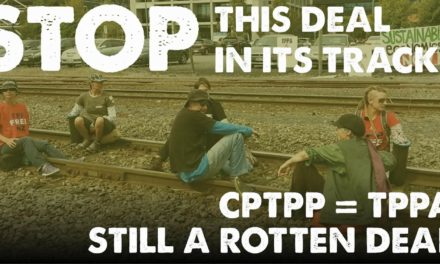