Thousands of New Zealanders turned out in protests across the country today against a Pacific-wide free trade deal claimed to be “selling out” the people’s future.

Protesters took to the streets in rallies in 22 towns and cities against the unpopular Trans-Pacific Partnership being pushed by Prime Minister John Key’s government against widespread opposition.

More than 3000 people marched in Auckland alone with a symbolic “Trojan horse” representing the TPPA being pulled along by corporate groups and an “Uncle Sam” character representing United States interests.

Many New Zealanders claim the TPPA will undermine the country’s sovereignty.

“It is about old-style imperialism. An Anglo-Saxon corporate ‘Old Boys’ club’ with modern technological toys,” said one rally organiser.

Groups of doctors opposed to the consequences for the New Zealand health system if the TPPA goes ahead were among those prominent in the march.

The Auckland rally gathered in the central city Myers Park and then marched down Queen Street.

Radio New Zealand reported that in Wellington hundreds of people marched from Midland Park to Parliament.

In Christchurch, almost 3000 people were reported to have gathered in Shand’s Crescent in Addington before a march to Hagley Park.

Gordon Campbell on the flag campaign 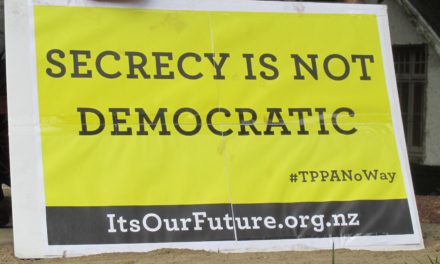