During the month of August 2014 Scoop published a total of 3,658 press releases. Over 1,500 of these press releases were published into the politics section. This is a large percentage, but no surprise on the lead up to a General Election.

Top 5 Scoop Press Releases for the month of August 2014

During the month of August 2014 Scoop published a total of 3,658 press releases. Over 1,500 of these press releases were published into the politics section. This is a large percentage, but no surprise on the lead up to a General Election.

However, the most read press release by our NZ audience on Scoop over the month of August was ‘Stan Walker Sings Te Reo for Maori Language Week’. This release was published on Friday the 18th of July (just a few days before Maori Language week began).

The release was also the most read press release for July gaining a large number of views during Maori Language week. Since then the interest has continued on a slow decline till the end of August.

The average time on the page for this release was 4 minutes 59 seconds during July showing a high level of engagement, during the month of August this fell, though only to 3 minutes and 23 seconds.

A high percentage of the audience reading this release in August was attributable to Google organic search.

The following five press releases were the most read press releases (by NZ page view numbers) according to Google Analytics on Scoop for the month of August 2014.

New Zealand’s favourite singer, Stan Walker, is to release his next song ‘Aotearoa’ in Te Reo Māori to celebrate Māori Language Week (July 21-27). And some of the proceeds of the song will go towards the Raukatauri Music Therapy Centre.

Judith Collins’ admission that she was involved in a baseless smear campaign against a public servant is more than enough reason for John Key to sack her as a Minister, especially as she is on her ‘last warning’, said Labour MP Grant Robertson…

The Inspector-General of Intelligence and Security (IGIS), Cheryl Gwyn, announced today that she would be instituting an inquiry concerning allegations that the New Zealand Security Intelligence Service (NZSIS) might have released official information …

4. The TPPA’s Dirty Little Secret: How US could write NZ’s Laws

The Taxpayers’ Union is slamming Bill English’s indication that the National Party will not offer voters any indication of tax cuts before next month’s general election. Speaking to journalists and analysts in the Pre-election Economic and Fiscal …

Peters Not Expected to Stand in Northland 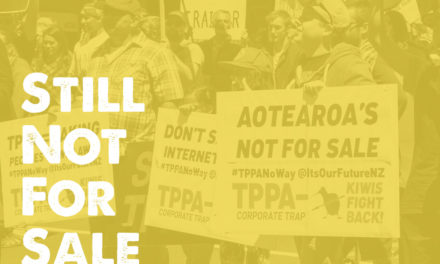 Groser’s ‘blanket approach’ in turning down OIA not lawful