‘It is disappointing to see Labour and New Zealand First squander the chance to clean up a treaty making process which they have previously criticised. If anything, the democratic deficit has deteriorated further, making a mockery of the new government’s promise of a “progressive and inclusive” approach to negotiations.’

Labour and NZ First ignored calls for a genuinely independent analysis and a health impact analysis they made in their dissenting opinions at the select committee on the original agreement.

‘Instead, we have a propaganda exercise, prepared by officials who negotiated the agreement for a government that has already nailed its colours to the mast. It patently fails to justify Labour and NZ First’s decision to sign a deal they have previously opposed.’

Professor Kelsey describes the quality of this NIA as ‘even worse than the original, because in summarising the impacts it treats the 20-odd suspended items, for example affecting medicines and Pharmac, as if they have been permanently removed. The assumptions underlying their economic projections are untenable, and blanket assurances on the right to regulate for health, environment and Treaty of Waitangi are misleading.

Any suggesting that alternative analyses can be submitted to the select committee is, she says, ‘nonsense’. The committee has no power and only considers the text once it has been signed.

The greatest concern for Professor Kelsey is the government’s refusal to say how many countries have agreed to side letters that exclude ISDS claims against New Zealand, let alone who they are, aside from Australia. Apparently, these side-letters won’t be released until the signing on 8 March.

The terms that govern the US re-entry and reactivation of suspended items are vague, as is the US’s ability to ask for and receive more. Professor Kelsey insists that ‘this matters. Japanese officials reiterated overnight that they hope the US will re-join, but that negotiating its new demands would be difficult.’

‘Equally, the government needs to explain whether New Zealand could – and would – require a side-letter excluding ISDS as a precondition of other countries joining, such as the United Kingdom post-Brexit.’

‘Yet again the NIA leaves people in a fog of spin, misinformation, half-truths and deliberate omissions. This government promised better. It has failed.’

Rally at Parliament against signing of TPPA – Oliver Hailes 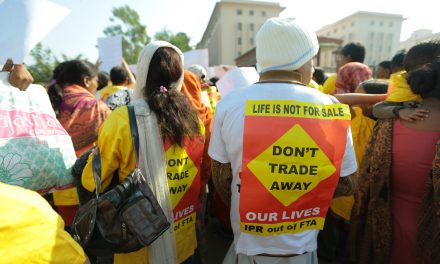