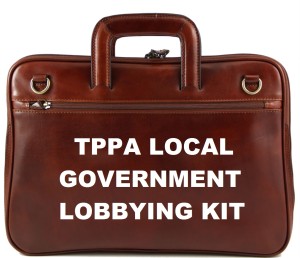 For some time now an amazing group of activists around the country have been involved in getting their local Councils to pass resolution sopposing the TPPA.  It puts a huge amount of pressure on central government, giving them a good idea of how various parts of the country feel, and can sway our political parties. Some of our amazing compatriots have put together the ‘Local Government Lobbying Kit‘, which contains a letter and resolution sent to all NZ Local Government Councils, along with a petition to assist your local campaign. For further information contact itsitsourfuture4.localdevnz@gmail.com or tppa.tasmanaction@gmail.com.

Still not sure how important is to lobby local government? Check out this piece from Albert-Eden Local Board member Graeme Easte, who played a key role in getting a resolution passed in Auckland.

Not all resolutions are the same, so take a look at the full list of Council that have passed resolutions covering TPPA :